Born in Dorchester: all wrong. Should have been born at home in Bridport. Had to be in hospital instead. 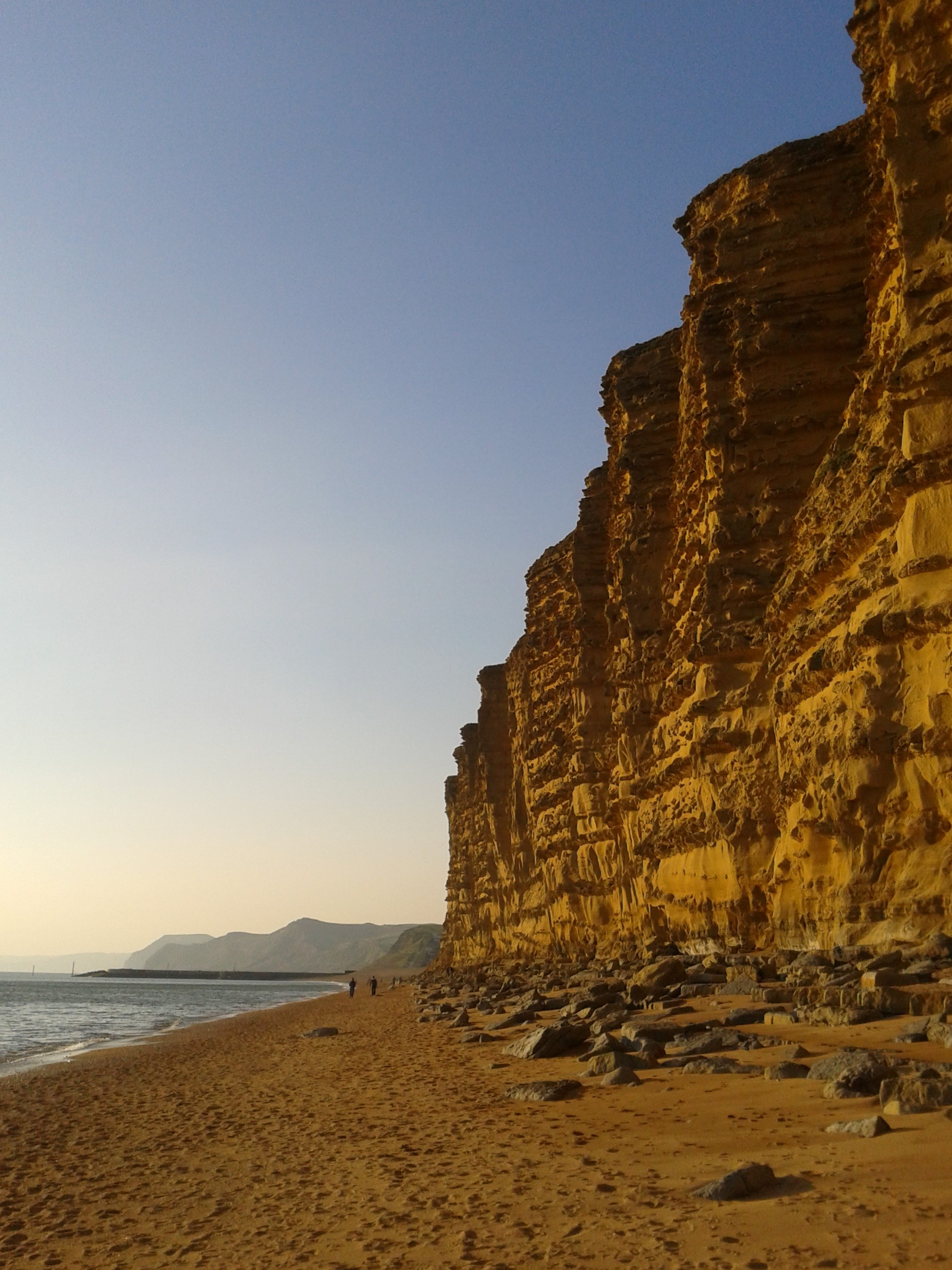 Raised in Bridport … the best little manufacturing market town in the West. The perfect mix of down to earth and flighty, historical and new, dead ordinary and weird, hills and valleys. It has three rivers! They meet and flow as one to West Bay (aka Bridport Harbour). Famous for ropes and nets (the Bridport Dagger), wide streets and twice-weekly markets, views of the surrounding hills and for being the Gateway to the Jurassic Coast: a World Heritage Site.

Left school. All work and no money: left Bridport and went to Holland. Happy times packing flower bulbs and travelling. Learned Dutch and trained as a nurse, while living in a squat and then a caravan in Haarlem, Noord-Holland. Life in a field seems like the best life possible.

Evicted from Haarlem and end up on an artificial island in Amsterdam, which turns into a kind of ghetto as most forms of alternative living are ‛cleared away’ forcing everyone to jam on to the island.

Go a bit loopy through burnout at the hospital and lack of English around me and pressure of living space. Feel like I’m losing my own language. Decide to travel back to Bridport by moped. Takes three days.

Start again in Bridport. Somehow, get involved in gardening, nursing, and juggling all at the same time. Pass my driving test and get my first camper van.

Go busking round Europe for a year in a red ex-Post Office Leyland Sherpa (think Postman Pat). Did I tell you I play the violin? And with fire.

Exhausted, come back and start again in Bridport.

Join Skidazzle, teach juggling and put on shows with the amazing Dr Bliss. He develops the Really Dangerous Show and its sequel, Escape from Danger, featuring the Machete Walk of Death, Bullet Catching and Sword-Fighting. I get to pull the trigger and am sometimes blown up. BANG! Perform in a fabulous musical dance-and-story act in blacklight in the theatre tent at Glastonbury. Oohs and aahs.

Live in a village in the middle of nowhere and finally face up to the thing I’ve wanted to do all along: writing. Write poems that sound like spoof country and western songs. Struggle with the myriad possibilities of short stories. Am not very good with pen and paper: not fast enough to keep up with brain. Borrow my first computer and learn touch typing. This make all the difference! My first play is performed: ‛Hurrah for Edward!’

A winter in Spain – to go on tour with the Pop-up Theatre. Somehow end up on a mountainside in Asturias with time to write. Settle down to work every day. Am happy.

Start again in Bridport. Semi-homeless again. What to do? Dust off my A-level English and get a place at the University of Glamorgan with a view to turning my wish to write into coursework – thereby legitimising all my efforts and safeguarding my writing time without having to answer questions about what the **** I think I’m doing when I ought to get a proper job.

Meet the great Rob Middlehurst. I ask him – can I be a writer? He says ‛You are!’ A wonderful, knowledgeable unselfish mentor. My first work is published in the Guardian. Support myself with a job as a support worker for students with disabilities. Get to attend many other lectures apart from my own. Graduate with first class honours and start my studies for an MPhil in Writing. A short story, ‛Pumping Up Napoleon’, chosen by Carol-Ann Duffy. It made her laugh out loud!

Rob arranges for me to teach the class I took with him in first year. My first time in front of students someone comes in and shouts, ‛She’s not a real teacher!’ I said, ‛It’s OK, they’re just drama students.’ It gets better after that. Meet many lovely people and enjoy the challenges that teaching can also bring. Write a draft of a historical novel set in Early Modern Italy. Finish a collection of flash fiction, published by Leaf Books as Tea for Mr Dead.

Complete a collection of short stories, published by Seren as Pumping Up Napoleon and other stories. ‘My Cousin’s Breasts’ is shortlisted for the Fish Short Story Prize.

Love Cardiff but meet my future husband and start again in a village in Dorset, near Bridport, with a weekly commute. See far too much of the M5. We move to Wales but end up way over on the other side, on a smallholding near Aberystwyth.

Spend nine years as a University Lecturer teaching creative writing working my way up to Award tutor and Senior Lecturer in Creative Writing. Hardly recognise myself as this person with a career. Not enough time for writing, and research on my historical novel stalls because I need to spend any free time I have writing or I get very grumpy.

In 2009, I resign my post to look after my husband, who has been diagnosed with mesothelioma: the cancer caused by asbestos.

Continue to write short stories when I can and even begin another novel but have to start all over again after my husband dies. Nearly die myself.

Decide to step away from the immediate experience of my own grief and give it to someone else by writing a novel, The Chicken Soup Murder. It’s a kind of tribute to my late husband as he once nearly killed me, by accident, in one of the ways described. I promised him I’d write about it some day and now I have, but the story is entirely about other, fictional, people and what happens when you can’t let go, particularly when letting go would mean accepting the greatest of all injustices: the deliberate taking of an innocent life. Complete the novel and move from Wales to Dorset. Start again in Bridport.

Meet a wonderful Dutchman and learn to speak Dutch all over again. Fall in love with windmills and the province of Zeeland. Get measured for a bicycle (‛Did you know, madam, that you are short of leg?’)

Now that I am back in Dorset, I am more than ever interested in the history of the

area, particularly the hillforts, pre-Roman times, Roman times and the coming of those pesky Angles and Saxons. I am learning to speak Cymraeg.

My flash fiction story ‛Chess’ was shortlisted in the Bridport Prize 2015 and won the Dorset Award, sponsored by The Book Shop, South Street.

The Chicken Soup Murder published by Seren Books was a finalist for the Dundee International Book Prize and runner up in the Dorchester Literary Festival Writing Prize 2019.

In October 2019, I achieve my dream of winning in the Bridport Prize, the International Writing Competition based in my hometown, by coming first in the Flash Fiction Category, with my 250-word story, ‘Aftermath’. This also brings me the coveted ‘Dorset Award’ for a second time. Thanks, Judge Kirsty Logan, and to the unknown readers who didn’t sift my story out. It’s all done anonymously by the way and my win is a great surprise to all!

19 thoughts on “A brief history of Maria’s time”

inspired by the colours of the land, sea and sky of Cornwall

The World Is A Book...
FallenStar Stories

childrens books and other ephemera

"Gratitude turns what we have into enough, and more. It turns denial into acceptance, chaos into order, confusion into clarity...it makes sense of our past, brings peace for today, and creates a vision for tomorrow." Melody Beattie

It isn't as easy as it looks. Wait, what? It doesn't look easy?

To The Happy None
TexasBowling.com