In 2018, April Fools’ Day and Easter Sunday coincide. The last time this happened was in 1956. The next time it happens will be 2029, if the date of Easter has not been fixed by then.

‘Aan tafel’ which means ‘At the table’ and also ‘Come to the table!’

Of all the theories about the origins of April Fools’ Day, certain things are held in common: one is that it’s natural to want to have a laugh at the beginning of spring; another is that at certain times of the year it’s a good thing to allow the normal order to be disrupted, in a good-humoured way, so that it can be maintained, by common consent, for the rest of the year.

Perhaps that’s what made Joseph Boskin’s Origins of April Fools’ Day April Fools’ Day hoax so believable. A professor emeritus at Boston University, he told a journalist, who was pushing him for an answer, that the tradition went back to the days of the Emperor Constantine, whose jesters and fools said they could rule more wisely than he, which he took with amusement, making one of them King for a Day in his place. According to his own testimony, he didn’t think he would be believed, and forgot about it, but the story had his country’s media fooled and he was even criticised for having damaged a young journalist’s career. According to Boskin, that wasn’t true either.

But it was necessary to make that clear, because there are rules about the kinds of pranks it’s acceptable to make on April Fools’ Day: a joke should do no real harm; and I was brought up with the belief that jokes are only allowed up to midday. After that the joke is supposed to be on the perpetrator. So haha Panorama. On an evening in 1957, in one of the most famous of all media jokes, Richard Dimbleby narrated the story of the spaghetti harvest.

It’s well done, with the right kind of detail to fool people who just weren’t that familiar with pasta. But the programme was aired in the evening and perhaps people were not then used to the idea that a serious programme like BBC’s ‘Panorama’ could be capable of making a joke.

On April Fools’ Day the tradition is often still followed that a piece of fake news given out in a serious tone in the morning is admitted to be a hoax by noon. But watch out: we now have global news, twenty-four hour reporting and the tweets of Donald Trump. It’s hard to know what’s real and what’s not on any day or hour or minute of the week.

For me, this last example of an April Fools’ Day prank is the best of its kind: it’s funny and doesn’t harm anyone. In fact, it’s doing a good job of making maths (math if you prefer) classes look interesting. Although the teacher, Matthew Weathers, who set up the whole thing and a string of others, works at a place with the unlikely name of Biola University, he gets 10 out of 10 from me for invention, planning, and sheer effort.

Click and enjoy. Happy Easter: and be careful out there. All is not what it’s pretending to be. 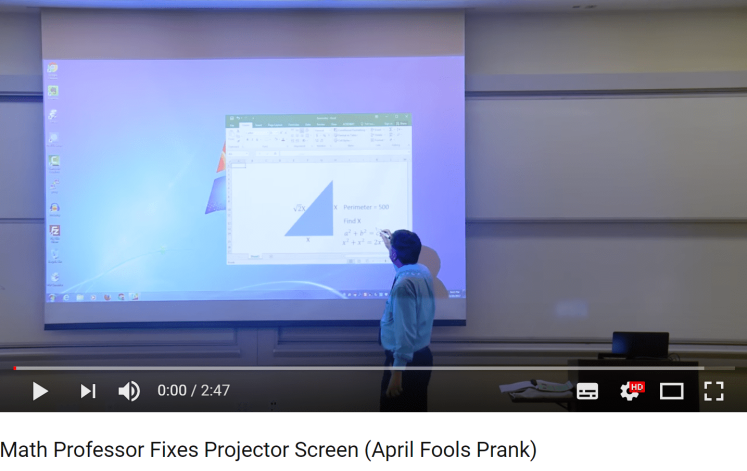 What are your best and worst April Fools’ Day stories? Please share them in the comments!

Pillaging the public library so you don't have to.

Photos, art - and a little bit of LIT.

Exploring the world of ideas through books

Which me am I today?

One person's experience of living with dementia

never knowingly without a pen

Short essays about novels and other fictional works

Academy of the Heart And Mind

Welcome to a world of emerging writers.

capturing memories one moment at a time

inspired by the colours of the land, sea and sky of Cornwall