On Tuesday 21 November, I’ll be reconnecting Bridport Past to Bridport Present with the launch of my debut novel, The Chicken Soup Murder. 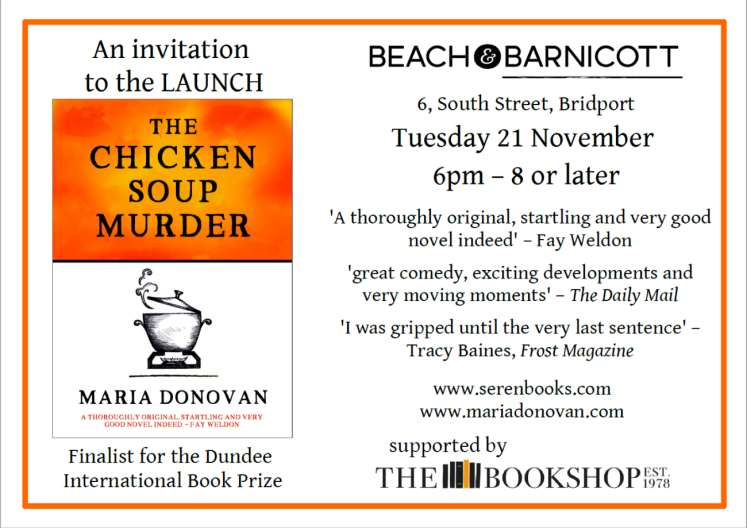 The venue is Beach and Barnicott, in South Street, just a few doors away from the house where we lived when I was born. It’s doubly exciting that the launch will be supported by Antonia Squire of The Book Shop.

The Book Shop didn’t exist until I was a teenager. I would have thought myself in Heaven to think that my own works of fiction would one day be on sale there: my first novel, The Chicken Soup Murder, and a collection of short stories, Pumping Up Napoleon.  Both are published by Seren Books, based in Bridgend. For many years I have come and gone from Bridport – and have spent much time in Holland and in Wales. West Dorset always draws me back.

People will know Beach and Barnicott as a warm and friendly café, restaurant and music and literary venue, which hosts Apothecary, Bridport’s monthly Open Mic for the spoken word, Story Slams and readings. Today I went to a wonderful reading and book signing by Gill Bar, whose story ‘Skylight’ won a competition run by Wessex FM and Creeds design and print.

I don’t remember things like that happening when I was growing up here. But then, there was no Bridport Arts Centre (many years of fund-raising went into roof repairs before it could be used), no Bridport Prize, no Bridport Literary Festival.

My flash fiction story ‘Chess’ won the Dorset Award in the Bridport Prize in 2015: a prize sponsored by The Book Shop. That must have been the first time I met Antonia. So thanks to Kate Wilson and the Bridport Prize for bringing us together! In the same year, The Chicken Soup Murder was a finalist for the Dundee International Book Prize. Two years further on and my novel finally has an independent existence.

My novel is partly set in Cardiff but mostly in a fictionalised Bridport called Buckington. The story unfolds in 2012 in real time so that the characters sometimes respond to or are influenced by great and small events of that year. In time to come it could look like very well-researched historical fiction ;-).

I set out to write a murder mystery but I wanted it to feel realistic. I had been bereaved and I wanted to be true to how that felt. I didn’t want it to come from my perspective.

In order to see everything from an entirely different point of view I made my narrator a boy of eleven, going on twelve.

He and the people he loves are affected by two different kinds of death: one natural and the other, he alone is sure, is a murder.

What would he see and understand in the behaviour of people around him? How would he keep his sense of humour? And finding that the adults have left him and his friend Janey to work things out for themselves, how could he ever make it all come right?

The novel was published on 25 September 2017. Apart from some fine endorsements from Fay Weldon and Danny Wallace, Christopher Meredith and Francesca Rhydderch, there have been some great and varied responses. Fanny Blake in The Daily Mail, Tracy Baines in Frost Magazine and people I know and some I don’t know have made me believe that someone out there other than me is fond of my offspring.

So that’s 21st of November in Beach and Barnicott, South Street, Bridport from 6pm. There will be a words of thanks from me and a reading. Other than that I hope it will be a lovely get-together of family and friends old and new. Please come if you are interested!

And if you can’t come to the launch and are interested anyway please think about trying a bit of my novel. You can go to any good bookshop and ask for it, or peek inside at amazon.co.uk or get a 20% discount by joining Seren’s free book club.

Am I excited? Yes. And I do really hope that you will read my book and tell the world what you think. It means a lot to a book’s life to have reviews on Amazon and so on.

To you who have already bought it and left me your kind comments on this blog, on my Facebook page, on Amazon, Goodreads and elsewhere, thank you!

2 thoughts on “Book Born in Bridport”

Teaching the art of composition for photography.

Exploring my world with pictures and words.

Pillaging the public library so you don't have to.

Photos, art, and a little bit of LIT.

Exploring the world of ideas through books

Which me am I today?

One person's experience of living with dementia

never knowingly without a pen

Short essays about novels and other fictional works

Academy of the Heart And Mind

Welcome to a world of emerging writers.

capturing memories one moment at a time